In 1915, Albert Einstein proposed the General Theory of Relativity (GR), in which gravity is described by the distortion of the fabric of spacetime surrounding massive cosmic objects. Einstein’s theory also predicted that perturbations in this web of spacetime would produce gravitational waves (GW) that carry information about their sources. Collisions of massive cosmic objects, such as black holes and/or neutron stars, can produce such GWs. Detections of such merging binaries by a global array of GW observatories, such as the advanced LIGO/Virgo and KAGRA (LVK) detector network, can therefore provide a unique opportunity to test the predictions of GR and also search for any yet unknown physics beyond GR. Gravitational waves are ideal messengers to test whether Einstein's GR theory is right! 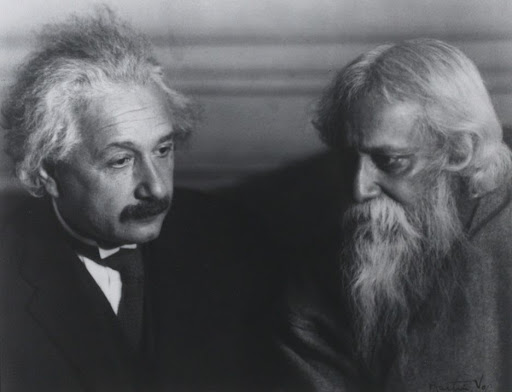 Photo: LARGE VINTAGE GELATIN SILVER PHOTOGRAPH by Martin Vos of the historic meeting between the Nobel laureates Einstein and Tagore on July 14, 1930

LIGO, Virgo and KAGRA recently published the new GW transient catalog GWTC-3, which detected about 90 compact binary mergers, including binary black holes, binary neutron stars, and neutron star-black holes. From the 90 events included in GWTC-3, 35 compact binary mergers from the second half of the third observing run (O3b) were reported for the first time (see Fig. 1). In this paper, researchers combined the new observational data with older data to seek possible departures from GR.

Substantial contributions were made by LIGO-India Scientific Collaboration (LISC) members to multiple analyses presented in this work. Prof. K.G. Arun led significant aspects of the planning and writing of the paper itself. Dr. Apratim Ganguly from the Inter-University Centre for Astronomy & Astrophysics (IUCAA), Pune, in collaboration with Aditya Vijaykumar and Prof. P. Ajith from International Centre for Theoretical Sciences (ICTS-TIFR), Bengaluru, carried out the inspiral-merger-ringdown consistency test on events to check the consistency of final masses and spins inferred from the inspiral and merger-ringdown parts of the gravitational wave signal. Srashti Goyal (ICTS-TIFR) contributed to the analysis to search for gravitational wave dispersion. Divyajyoti and Prof. Chandra Kant Mishra from IIT-Madras along with Sayantani Datta and Prof. K. G. Arun from Chennai Mathematical Institute (CMI) contributed to the spin-induced quadrupole analysis to test the nature of the binary black hole and to look for possible binary black hole mimickers. Aditya Vijaykumar was involved in the review of this analysis while Dr. Ganguly reviewed the pyRing analysis, which is one of the ringdown tests of general relativity (GR). LISC members have a strong presence in the testing GR group where they participate regularly in both operational and long-term efforts, apart from various other LVK collaboration work. 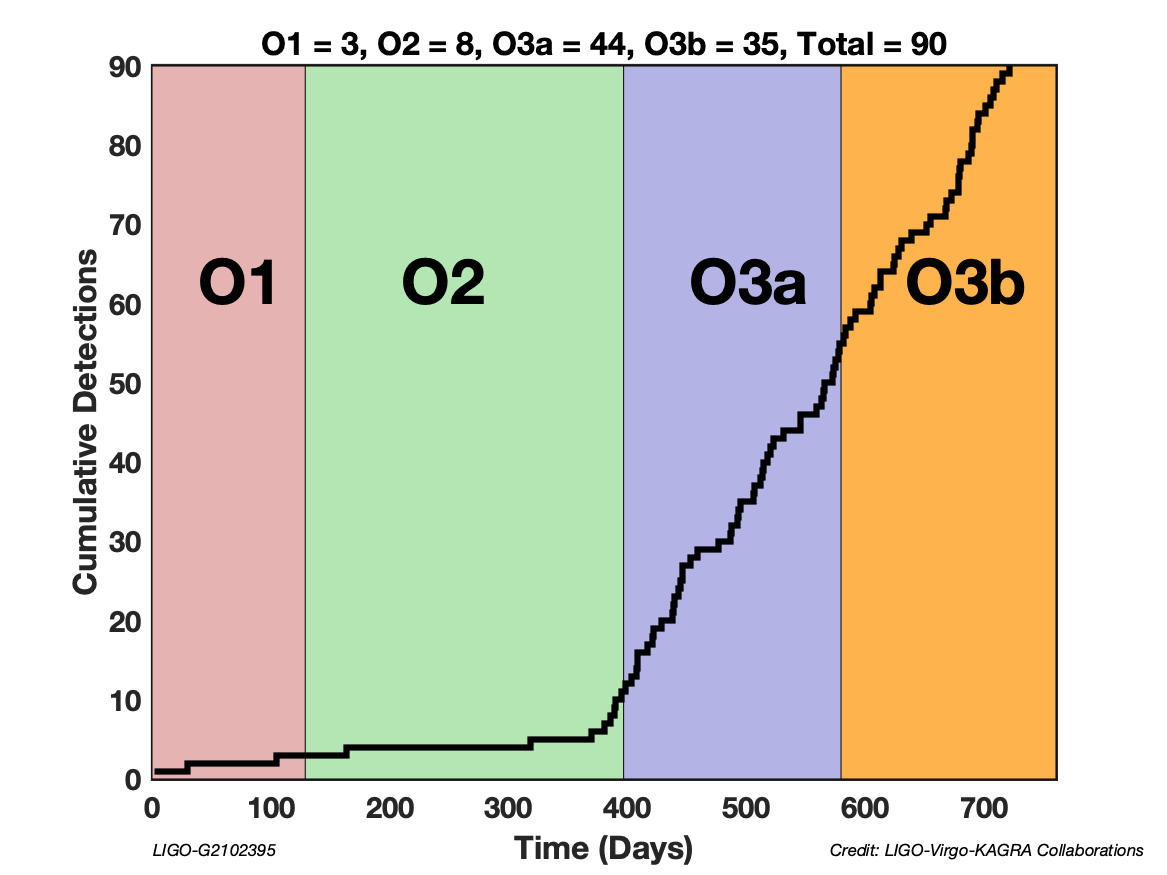 Figure 1: Durations of the first three observing runs of advanced LIGO/Virgo detectors and the cumulative number of detections made (not all of these binaries were analysed to test GR).

“These impressive results underscore the unique role gravitational wave observations play in searching for any physics beyond general relativity. The contributions made by the Indian scientists towards these results are particularly commendable.” says Prof. K. G. Arun, a researcher at the Chennai Mathematical Institute.

Any experiment makes measurements in presence of noise and GW detectors are no exception. When searching for deviations from GR, noises that are present in the detector can mimic such violations creating a risk that may be incorrectly claimed as a false violation. To avoid this, the analysis was restricted to loud events only whose signals may resemble detector noise only once in 1000 years or higher, resulting in 15 events to be analyzed from O3b. Ten different tests of GR were carried out on this selected set of events to look for deviations from GR of different origins:

The most straightforward test of GR is to subtract from the observed data the GR waveform that fits the data the best. The residuals left behind by this procedure for the events studied were found to be consistent with the detector noise, providing evidence for the consistency of the data with the predictions of GR.

GWs from mergers of neutron stars and black holes have three phases of evolution: the slow inspiral of the two bodies toward each other, the merger of the two bodies into one, and the ringdown of the remnant compact object. An important consistency check is whether the waveforms from the inspiral and post-inspiral phases are consistent, and they were found to be in good agreement for all the analysed events [see Fig. 2]. 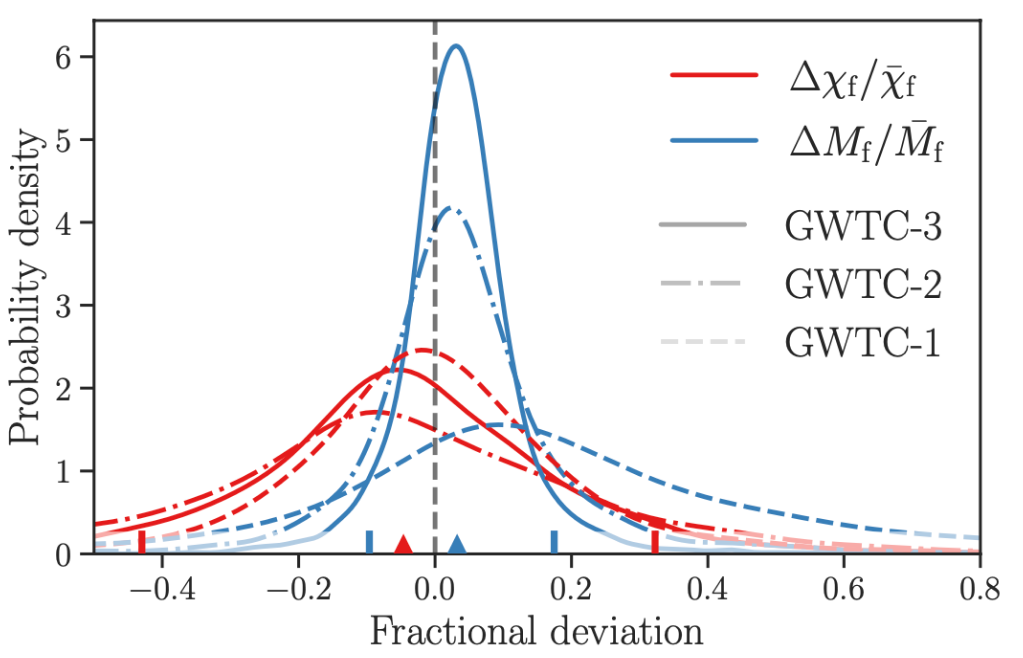 Image 2: Fractional difference between the mass (blue) and spin (red) from the inspiral and post-inspiral parts of the gravitational waveform inferred from GWTC-3 are compared against the results from the previous analyses (GWTC-1 and GWTC-2). The grey vertical line shows the GR value of zero and the results show excellent consistency with GR.

The nonlinear and complex physics during a merger can lead to various physical effects that get encoded in the gravitational waveform, and these can be searched for using parameterized models. Any modified theory of gravitation (not GR) may have a different prediction for one or more of these effects. Researchers searched for evidence of non-GR physics in the inspiral and merger/ringdown phases of the evolution, but found no statistically significant inconsistencies with GR.

If one of the compact objects in the binary is spinning (such as a spinning or Kerr black hole), this can lead to spin-induced deformation of the object (just like how earth’s rotation leads to flattening at the poles and bulging at the equator). This effect was tested and no evidence for any exotic compact objects was found.

In a similar way, scientists tested whether GWs emitted during merger and ringdown follow the predictions of GR. They found the test to yield consistency with GR within the statistical error uncertainties.

According to GR, GWs travel at the speed of light, and their speed is independent of the frequency of the wave (non-dispersive). But modifications to GR can lead to dispersion. Dispersion results in the frequency components of the wave traveling at different speeds, causing differences in their arrival time at the detector. Analysis revealed no evidence of GW dispersion. This also led to imposing constraints on a class of theories (massive graviton theories).

While GWs waves in GR can only have two states of polarisation: plus and cross, alternative theories of gravity can have up to six modes of polarisation. LIGO and Virgo detectors were able to set a partial limit on the non-GR polarisation content in the signals observed, and the analysis showed no such presence, and the data conforms with the predictions of GR.

There exist theoretical alternatives to black holes which are referred to as black hole mimickers, because they can mimic the properties of black holes but are not GR black holes. While black holes in GR have an “event horizon” (a perfectly absorbing surface), in black hole mimickers, the equivalent of an event horizon may be a surface which may be partly or fully reflecting. It has been argued that the post-merger signal from mergers of such objects can contain repeating echoes of the ringdown signal. Such echoes were searched for in the data but none were found, implying the consistency of the merger remnants with rotating black holes in GR.

The recently published results searched for evidence of possible breakdown of GR in nine different ways. It was found that within the statistical uncertainties due to noise and possible unknown systematics due to inaccurate waveform models, predictions of GR are completely consistent with the detected events. Given the importance of a detection of possible breakdown of GR, more such tests are planned in the coming years. New tests could probe entirely new facets of gravity that are not explored till date using more sensitive detectors (such as LIGO-India) that will be operational in the next few years.