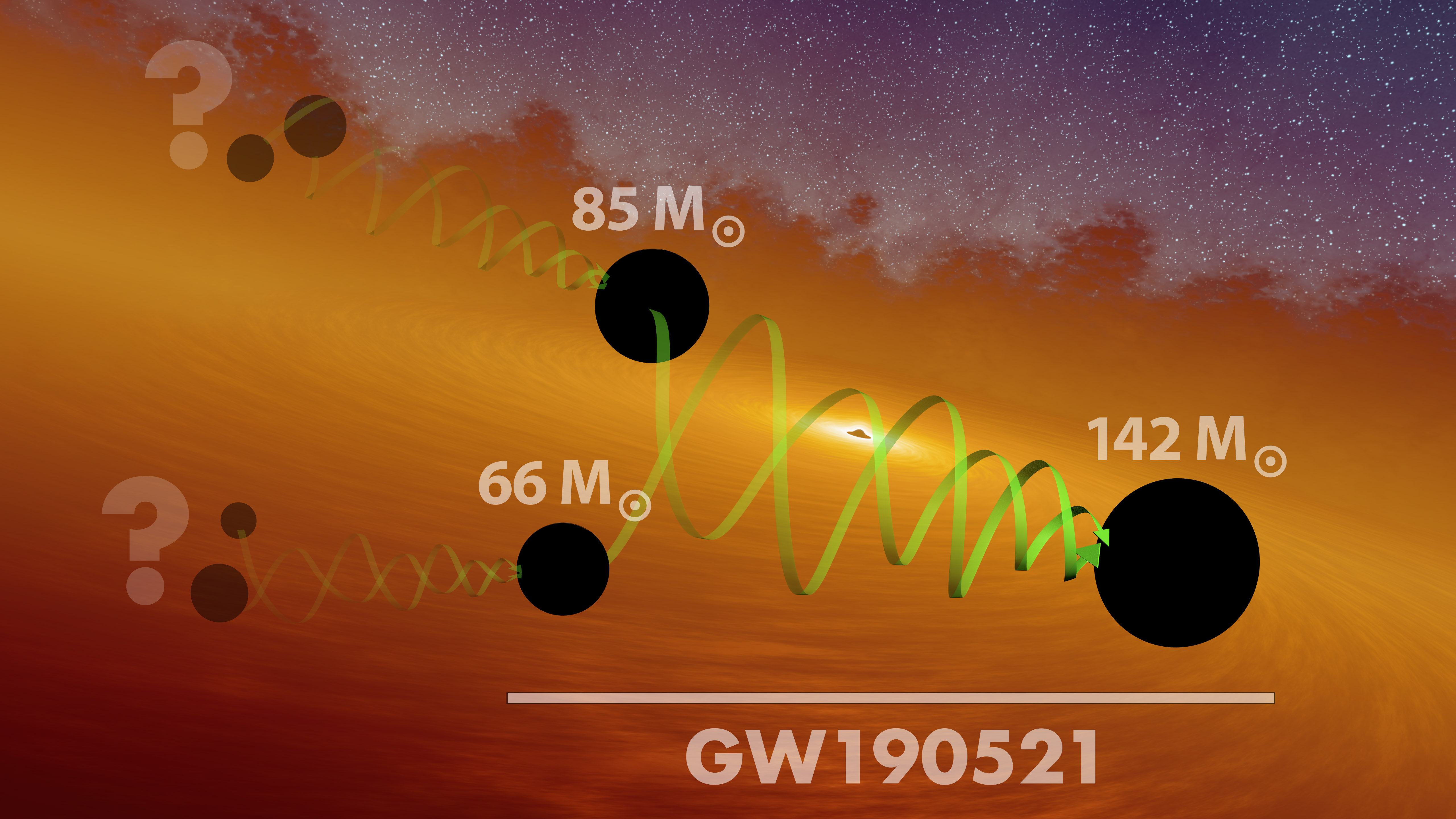 On May 21, 2019, at 8:32am IST, the Advanced LIGO detectors (at Hanford, Washington and Livingston, Louisiana) and advanced Virgo (in Cascina, Italy) detector during the third observing run observed a gravitational-wave signal from the merger of an extraordinarily massive pair of black-holes orbiting in a binary system. The event has been named GW190521.

In a compact binary system (See figure below), the two black holes inspiral, coming ever closer to each other, culminating in a massive collision and emitting a burst of gravitational waves. At the end, the system settles into a single final black hole. This signal has three phases — inspiral phase, merger phase and ringdown phase. Heavier binary systems pass quickly from our detector’s lowest detectable frequencies to coalescence, giving rise to shorter signals. The observed duration of the signal from GW190521 was 0.1 sec. 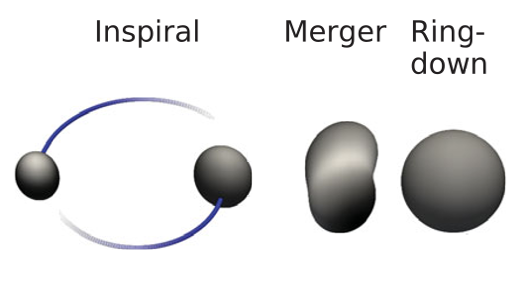 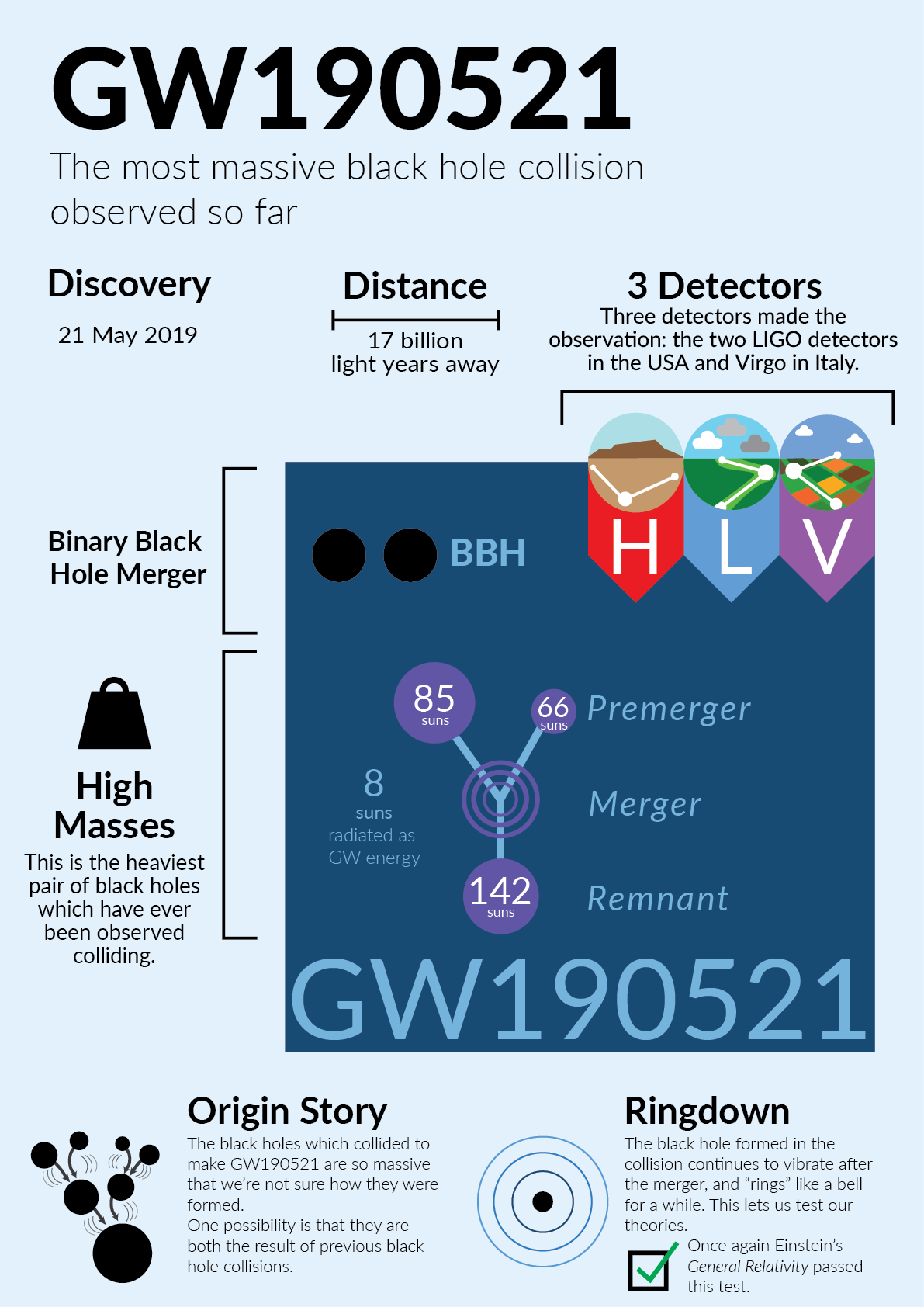 What makes GW190521 an interesting event?

Astronomers classify black holes according to their masses. At one end of the mass range are the “stellar mass black holes” with masses below 100 times the mass of the Sun. Pairs of such black holes make up the observed LIGO-Virgo black hole mergers till date.

They are thought to be the end stages of massive stars and formed by the gravitational collapse after undergoing the volatile supernova explosion phase. Astrophysical models suggest that black holes with masses between about 65 and 120 times the mass of the Sun cannot be formed by a collapsing star. This mass range is termed as the ‘’mass gap”.

The other end of the black hole mass range are “supermassive black holes” with masses above hundreds of thousands to billions of times that of the Sun. Our own Milky Way galaxy has a black hole of 4 million times the mass of the Sun at its centre. Exactly how these monstrous black holes are formed remains a bit of mystery.

Between stellar mass and supermassive black holes is the mysterious realm of “intermediate mass black holes” (IMBH) with masses in the range of 100–100,000 times that of the Sun. There was no conclusive direct observation of an IMBH in astronomy till the observation of GW190521. 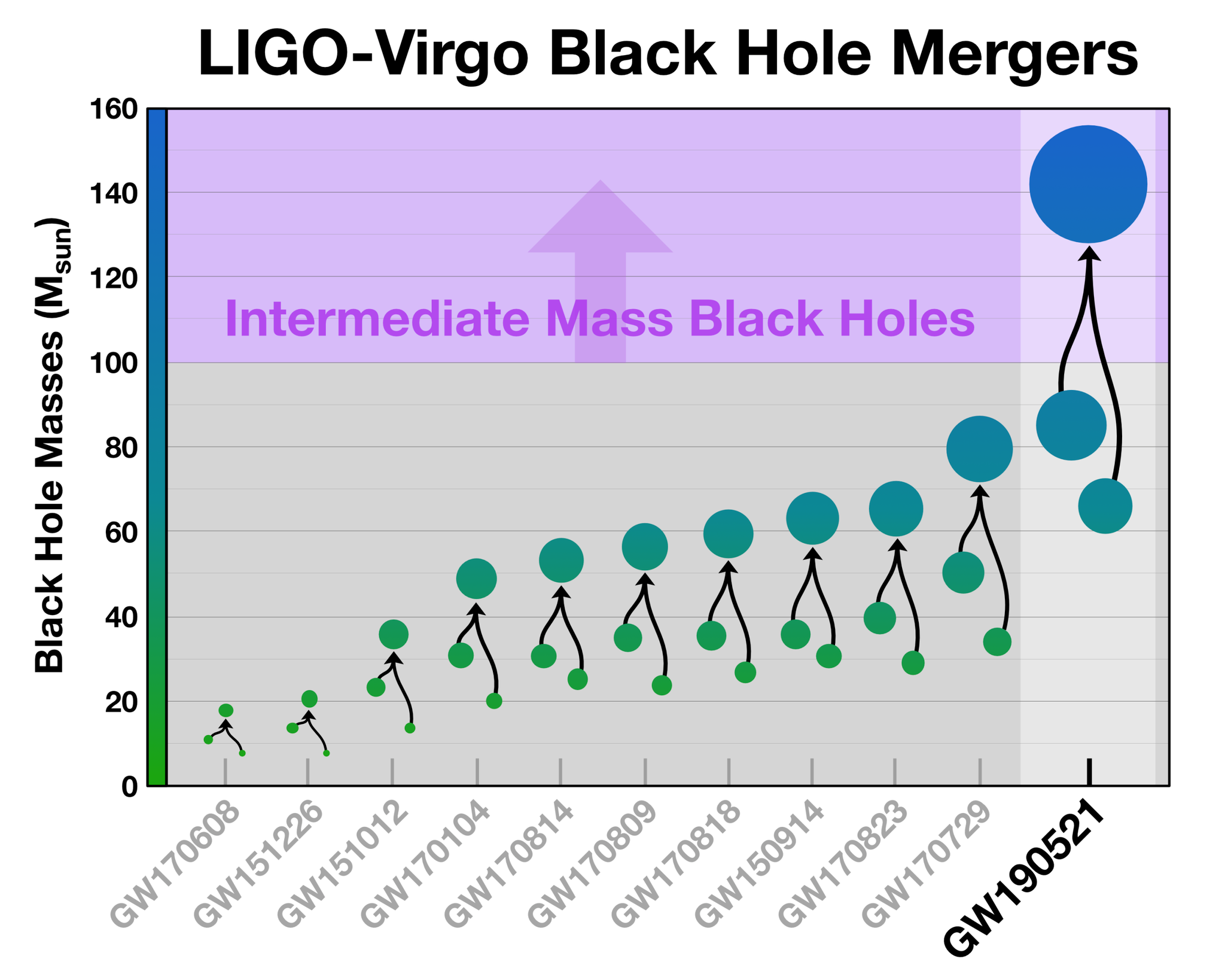 Numerical simulation of two black holes that inspiral and merge, emitting gravitational waves. The black holes have large and nearly equal masses, with one only 3% more massive than the other. The simulated gravitational wave signal is consistent with the observation made by the LIGO and Virgo gravitational wave detectors on May 21st, 2019 (GW190521). Details on the visualization: * The „apparent horizon“ of the black holes in the simulation are shown in black. At 0:10 the simulation finds an enveloping apparent horizon that signals the two black holes have merged. * The gravitational radiation is translated to colors around the black holes. The colors transition from blue, representing weak radiation, to red, representing strong radiation. Specifically, the coloring represents the real part of the gravitational wave strain. The strain is computed from the simulation’s extrapolated waveform, which is shown at the bottom of the screen. * Only the mass-ratio of the two black holes is relevant for the numerical simulation, not their total mass. The large total mass inferred for the black holes that produced the GW190521 signal only affects the conversion from simulation-time to real-time that is shown at the bottom of the screen. The movie shows approximately half of the observed inspiral duration reported for the GW190521 detection. Credit: N. Fischer, H. Pfeiffer, A. Buonanno (Max Planck Institute for Gravitational Physics), Simulating eXtreme Spacetimes (SXS) Collaboration

Indian contribution to the discovery

The gravitational wave research group from IIT Bombay is playing a key role in the intermediate mass black hole search in the LIGO-Virgo data along with the colleagues from LIGO Scientific and Virgo collaboration since the first observing run. The group was involved in the detection studies of GW190521 event. To confirm the astrophysical nature of the weak gravitational wave signal, scientists study and assess the chance that the noise could have mimicked the signal. The group was involved in such a study to assess the detection significance of GW190521 in the phase matching signal detection search along with the colleagues of LIGO-Virgo scientists. In addition the group contributed in assessing the distance reach of various searches in the intermediate mass black hole parameter space. The research group at IIT Gandhinagar was involved in developing the filter bank used for the detection of the black holes in the third observing run along with LIGO-Virgo scientists.

The GW190521 signal provided a unique opportunity to test the General theory of relativity especially to test the merger and ring down part of the signal. Tests were performed to search for extra features of the signal predicted from alternative theories of gravity. The observation of GW190521 was consistent with the physics given by Einstein’s general theory of relativity.

LIGO-India will play an important role in learning more about the source properties of such massive binaries. ​Owing to its geographical location relative to the other detectors on the globe, LIGO-India will enable much more precise localisation of the compact binary black hole merger events. Further, adding one more detector in the detector network will enable the network to test Einstein’s theory of gravity even greater precision and in more detail.

Indian scientists have made pioneering contributions to the gravitational-wave science over the last three decades. In particular, they have contributed to the fundamental algorithms crucial to search for inspiraling binaries in noisy data from multiple detectors, in computing the theoretical waveforms of GW signals by solving Einstein’s equations, in separating astrophysical signals from numerous instrumental and environmental artefacts, in the interpretation of joint gravitational-wave and gamma-ray observations, tests of Einstein’s theory and many other aspects of the data analysis.