Balls on a Trampoline

Space is dynamic. No, not Space - Spacetime. When Einstein put forward his Theory of Relativity (starting from the Special Theory of Relativity to the General Theory of Relativity), he abandoned the concept of space and time being two different entities independent from one another - the concept of Space being the rigid matrix of existence and the flow of Time being universal, ticking equally for the bored retired man feeding the pigeons and the exuberant young guy rushing towards the morning train - was not compatible with Physics. In 1905, Special Relativity was introduced to the world by Einstein (although the inevitability of it

was floating in the air for quite some time) - Space and Time were united, and whereas Time still did tick almost equally for the old man and the young guy, it ticked differently in extreme situations - extreme velocities. Space and Time became intertwined into Spacetime. All the orthodox notions such as the universality of simultaneity, ‘ether’ being the all-pervading medium defining an absolute space- broke down and was replaced by a more superior yet bizarre concept of a world where space could shrink (making things shrink with it), twins aged at different rates when one of them was shot into space, and mass could be converted to energy! In this weird world, the only thing kept relentlessly constant was the ‘speed of light’ - about three hundred thousand kilometres 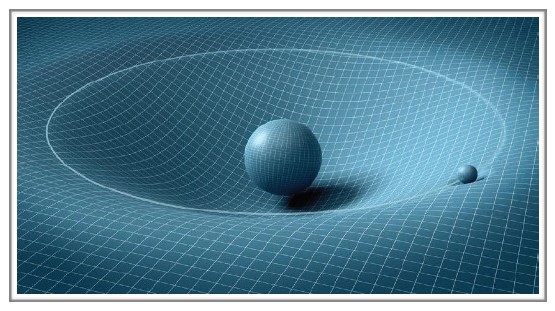 per second - always the same, doesn’t matter if you run towards it with a pair of speed-detecting binoculars, or run alongside it. That, in turn, meant that nothing could run faster than light- and when we said “extreme” velocities we actually meant velocities close to that of light. Spacetime was born, but it was still static, still flat. Things were about to get much crazier, ten years later.

In 1915, when General Theory of Relativity (GR) was published by Einstein, Gravity was recruited to this drama. And it started to do strange things all around. It warped Spacetime - when a massive object such as a star or a planet sat on its lap, it started to bend it - just like a heavy metal ball would bend a trampoline. According to GR, it is this curvature of spacetime around a massive object that creates the illusion of ‘gravitational attraction’; when you throw a ball up in the air and it follows a curved trajectory to fall back to earth, it’s not really the earth ‘attracting’ the ball - rather, the ball is following a curved path (a ‘geodesic’- a path that an object free from any other influence will follow in response to gravity) defined by the earth beforehand (the path will depend on the initial speed, of course) because of her existence in the Spacetime. Amazing! Now, if Spacetime itself is bent, then all the things existing on it must be subject to its curvature - including light! All the new phenomena predicted by GR - slowing of time in a gravitational ‘potential well’ (gravitational time dilation), the precession of the orbit of mercury, bending of light around a massive object, etc. - were subjected to experimental tests, and they all passed the exams with flying colours. But Spacetime is still static. Will it ever start to move?

It did- and that brought about even more drama to the story. It started to move in two ways - expand like a stretchy membrane, and produce ripples like a stone thrown into a pond does. We won’t be discussing the first one here, but the latter is the topic of this article - Gravitational Waves (GW).

Ripples on the Ocean of Nothingness

When it was found that a massive object warped the spacetime around it, the question came (the actual history is a lot less straightforward than that, and a lot more interesting, but let's save that for another day) - what happens if you shake it? In other words, what happens if it accelerates? Just like a ball immersed in water will create waves if it is shaken, spacetime will create waves if the massive body is ‘shaken’. Before going further, let’s have a closer look at what we mean by ‘shaken’. The object will leave no effect on spacetime whatsoever if it moves with uniform velocity- because, well, with respect to what is it moving?

Gravitational waves carry energy, so their existence cannot be subjective - just like an electrically charged particle won’t radiate if it moves with uniform velocity. If it has an acceleration, however, e.g. a binary system of celestial objects- it will emit gravitational waves and send out energy into space. It will also happen for a pulsating star, where the star suffers periodic deformations due to some mechanism- but there’s a caveat there. If the pulsation is always in a ‘spherically symmetric’ way, i.e. it always keeps a spherical object spherical (more precisely, in physics parlance, if it doesn’t change the mass quadrupole moment of the system), there will be no GW. GW will be generated if there’s some pulsation present which breaks this symmetry (or generates a change in the mass quadrupole moment). 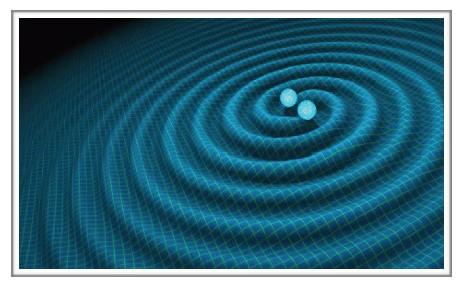 GWs are very faint- which is a good thing because the earth will not lose its orbital energy into GWs and fall on the sun in the foreseeable future, and a bad thing because that makes GWs very hard to detect- so faint that when two gigantic black holes (even though billions of light-years away) plunge towards each other in a virulent inspiral and eventually merge and spew out energy equivalent to several solar masses in the form of GWs, that only creates a length change about thousand times smaller than the size of a proton to a GW detector of several kilometres in length! But- speaking of which- what does a GW do when it passes through something?

Since the waves are disturbances on spacetime itself, it will distort anything that it passes through. Waves, in general, tend to follow a periodic motion- GWs do too. When they pass through an object, they stretch and squeeze the spacetime and the object sitting in it must respond to that by getting stretched and squeezed in the same manner.

One ‘fun fact’ here. If you try to calculate the acceleration that a ‘free particle’ (‘free’ from other influences and ‘particularly’ small so that the math is simple) undergoes, you’ll get a zero- the particle remains at its original position even when the GW is passing through! This may sound preposterous since an oscillating particle is obviously supposed to have a non-zero acceleration; but if you think just a little bit more, the reason is pretty simple. When we say that something has a velocity or an acceleration, we primarily mean that they have some form of movement through space. If the movement is caused by the moving space(time) itself, then how do you quantify that movement? This is where a concept of “proper” distance and “co-ordinate” distance comes in, and is of paramount importance in the Theory of Relativity. Co-ordinate distance is the distance between two free particles as measured by a certain co-ordinate system- if you fill up space with gridlines, then the effect of GWs will be to stretch and squeeze the gridlines along with the particles sitting on it, so effectively the particles won’t move at all with respect to the gridlines, thereby keeping their “co-ordinate” separation constant. But the “proper distance” between them will change- this is the physical distance between them, irrespective of the co-ordinates you choose.

In an extremely exaggerated form, the adjacent animation shows the effect of GWs on a ring of particles- on the left is what is called a ‘plus-polarized’ GW, and on the right is a ‘cross-polarized’ one- and yes, they can be obtained from one another just by a 45º rotation- but they are independent polarization states, just like the polarization states of a photon (these are the polarization states of the particle responsible for the gravitational communication of two massive particles- a graviton- fancy name, isn't it?). One more interesting piece of fact is that further away two particles are from each other, more a GW will push them apart and pull them close- in other words, in case of a weak enough GW, the (proper) displacement

Image Credit: Animations adapted from those by MOBle on Wikipedia.

between two particles due to the passing of a GW is proportional to the initial distance between them. This fact is the reason why scientists have to build GW detectors huge in size- so that there is detectable length change due to a GW passing by. We will talk about the detectors later in more detail.

Samanwaya is a doctoral student at the Inter-University Centre for Astronomy & Astrophysics, Pune, India 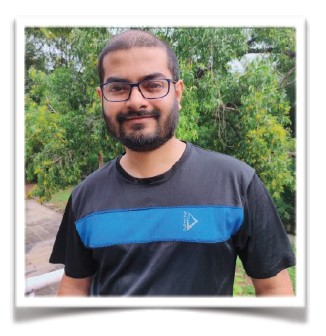