Einstein’s Theory of General Relativity describes gravity as a deformation in the fabric of spacetime caused by the presence of massive cosmic bodies, such as Black Holes (BH) and Neutron Stars (NS). When these objects collide or are perturbed, ripples travel across the fabric of spacetime as Gravitational Waves (GW). Until now, the LIGO-Virgo collaboration (LVC) of GW detectors has only been able to observe collisions between pairs of black holes or neutron stars. For the first time in January 2020, the LIGO-Virgo network of detectors made the ground-breaking discovery of gravitational waves from a pair of “NSBH mergers”, collisions between a neutron star and a black hole. 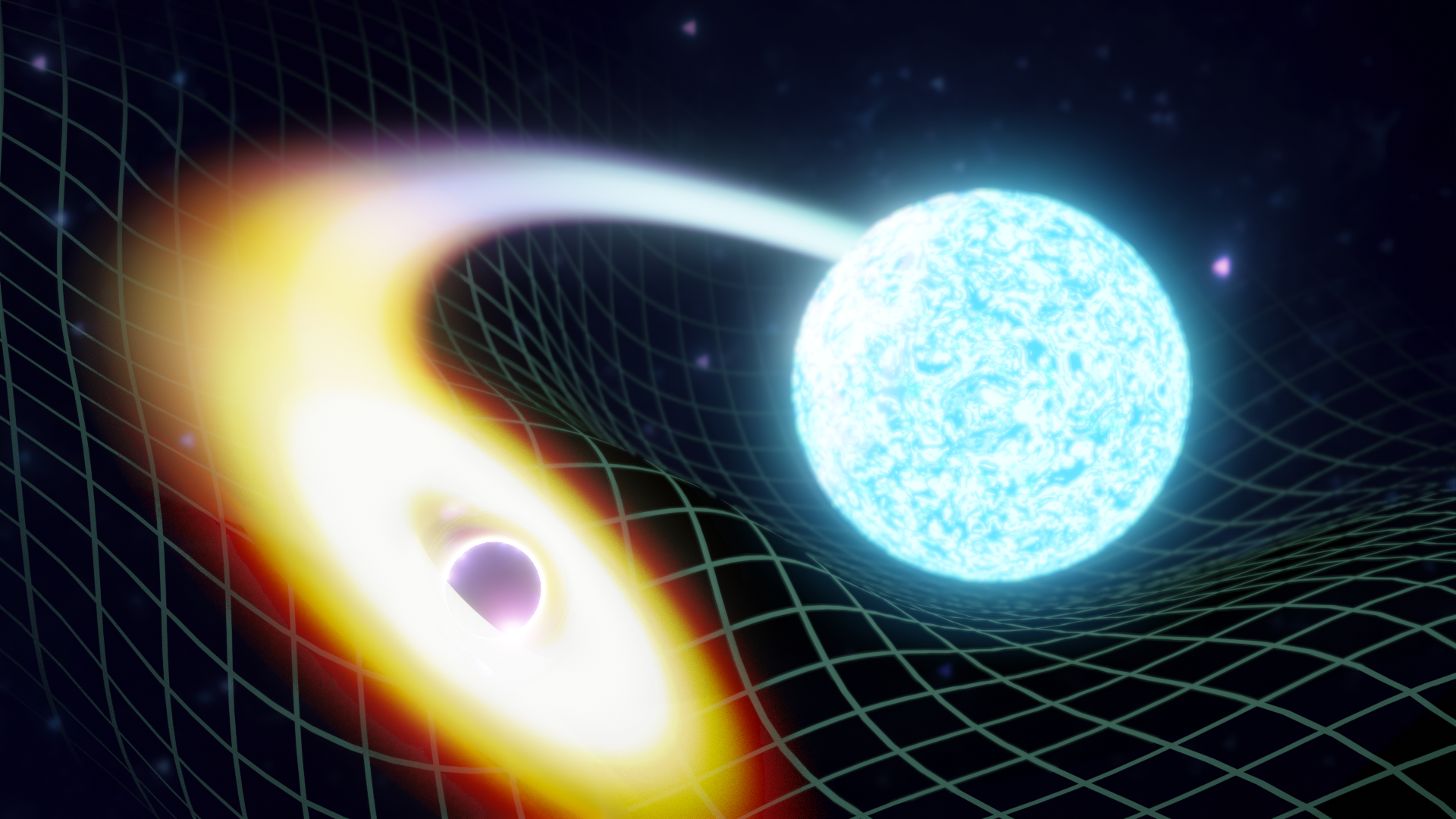 Black holes are so strongly gravitating that even light cannot escape from them. If our sun was shrunk to a size of about 3 km, then it would become a black hole. Neutron stars are very dense, such that if we shrink the sun to the size of a city (nearly 15 km radius), then it would have the same density as a neutron star.

Black holes can rip apart a nearby orbiting neutron star, and form a surrounding accretion disk, as shown in Fig. 1.. From various observations and theoretical models, the accretion disks can lead to the release of particles and light (Electromagnetic radiation). Though the chances of forming these accretion disks is very low for such NSBH systems, many telescopes searched for the emission of light (or EM counterpart) as soon as they were detected. However, no subsequent emission of light was observed. Even if the accretion disk were there, detecting these EM counterparts coming from such enormous cosmological distances is quite challenging. 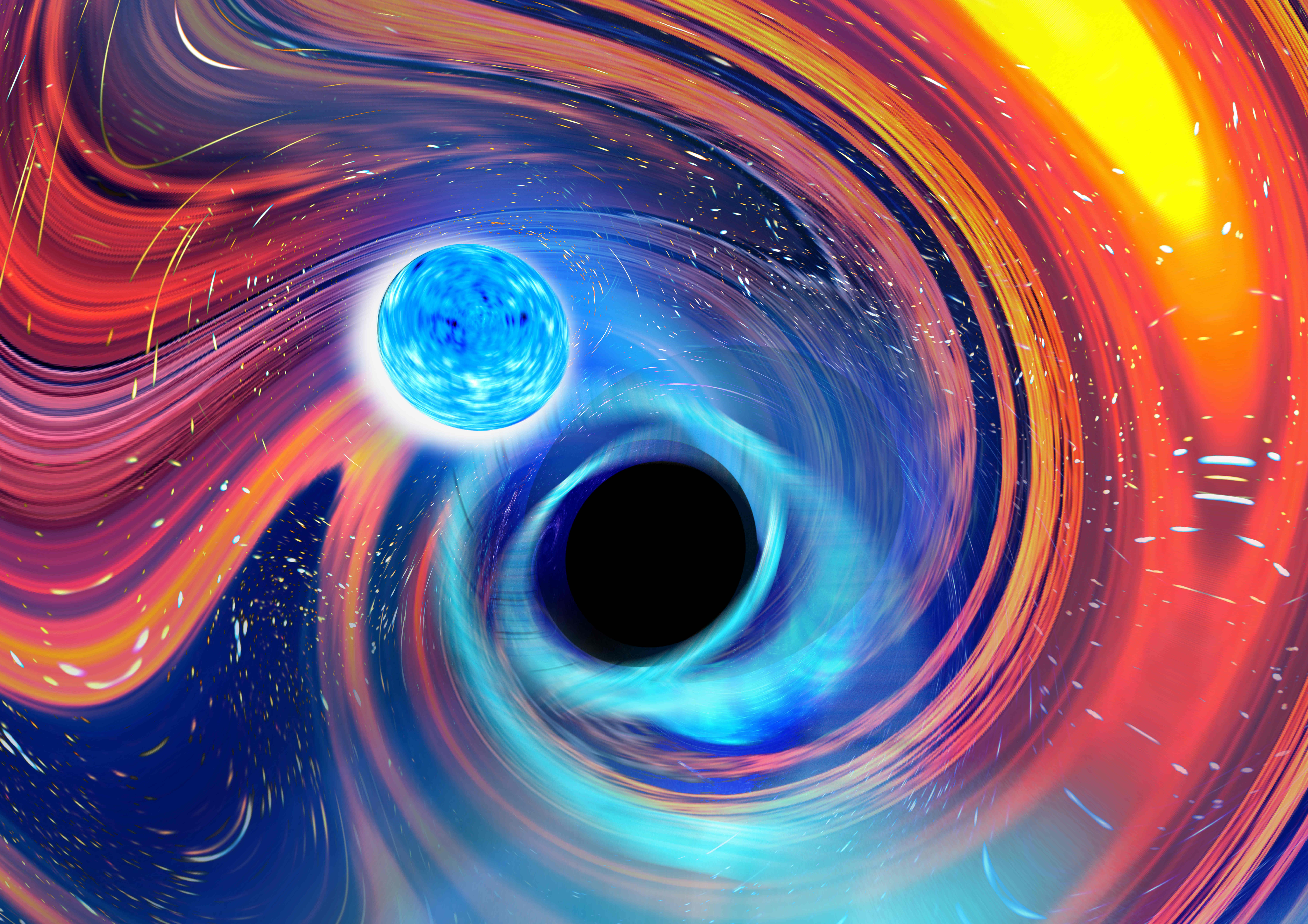 The first collision event nicknamed GW200105 was detected on 5th January 2020, by the LIGO-Livingston and Virgo observatories, while the second one, nicknamed GW200115, was detected on 15th January by three observatories: LIGO-Livingston, LIGO-Hanford and Virgo. Previously, in August 2019, another gravitational-wave event was observed by LIGO and Virgo which might have been an NSBH merger, but the mass of the smaller component of that binary system did not agree with the expected mass of either neutron stars or black holes (see Fig. 3). For these two new gravitational-wave events, detected in January 2020, scientists are highly confident that the lower mass component of each binary lies in the theoretical range expected for neutron stars.

How were the detections made?

As the two compact and massive bodies orbit around each other they come closer, and finally merge, due to the energy lost in the form of gravitational waves. The amplitude of the waves that are currently detected by the LVC is one part in 10^21, and corresponds to a change to the path of the light within our detectors that is much smaller than even the size of the nucleus of an atom! 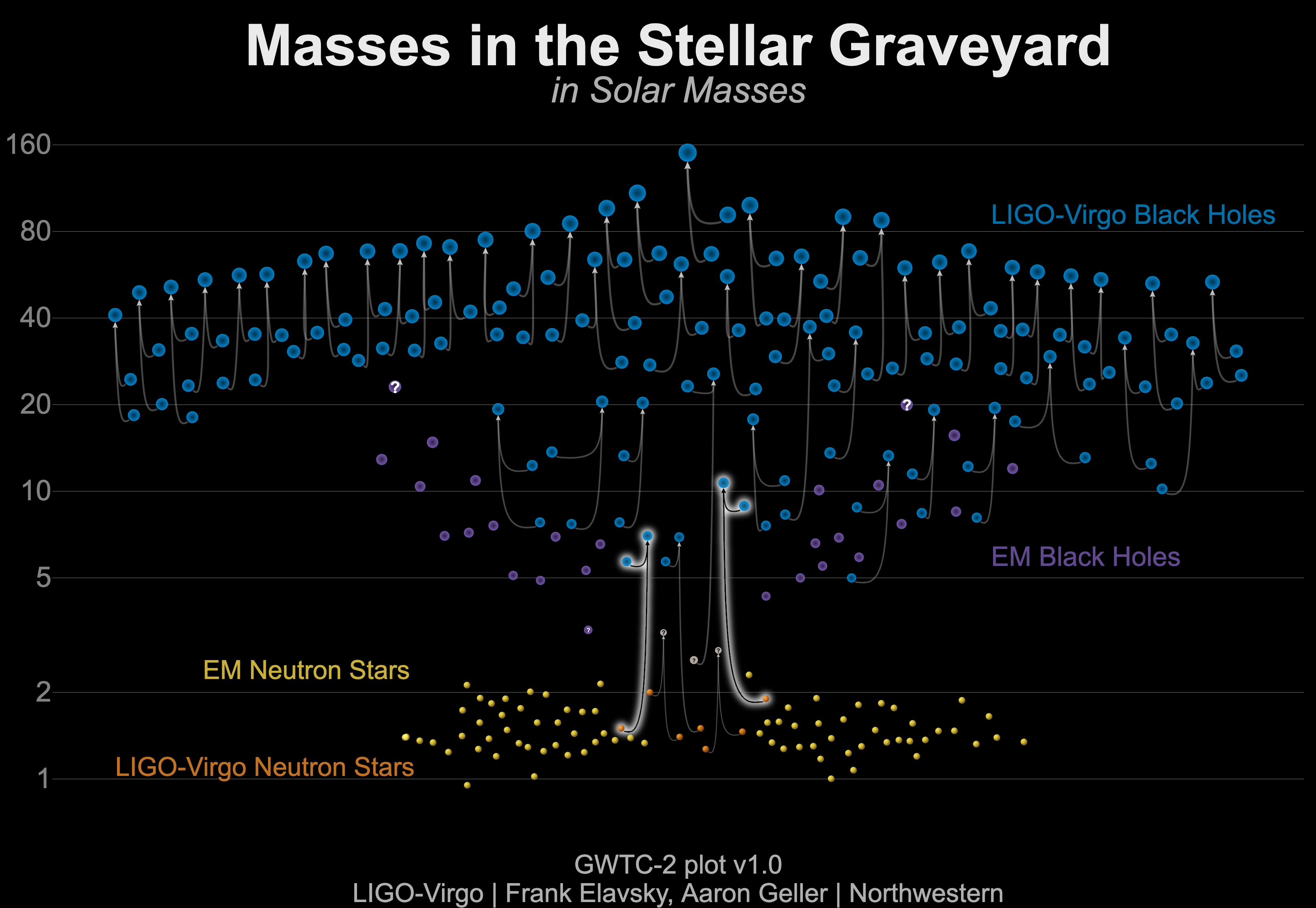 The GW signals are buried deep inside a lot of background noise. To search for the signals, scientists use a method called matched filtering. In matched filtering, various expected gravitational waveforms predicted by Einstein’s theory of relativity, are compared with the different chunks of data, to produce a quantity that signifies how well the signal in the data (if any) matches with any one of the waveforms. Whenever this match (in technical terms “signal-to-noise ratio” or SNR) is significant (larger than 8), an event is said to be detected. For GW200105, the SNR was about 11 and for GW200115 was close to 13.5. Observing an event in multiple detectors separated by thousands of kms, almost simultaneously, gives scientists increased confidence that the signal is of astrophysical origin, which is the case for both events. Fig. 3 shows the detection of gravitational waves from binary mergers, right from 2015.

How sure are we that they are NS-BH mergers?

Using Parameter Estimation tools scientists find the probable masses, spins, distances, locations of these mergers from the data. Both of these events occurred 1 billion light years away! As the GWs also travel with the speed of light, this means that we observed mergers that happened ~1 billion years ago---well before life appeared on earth!

For GW200105, the mass of the heavier object is about 8.9 times the mass of the sun (Msun=2 x 1030 kg!), and for the lighter one is 1.9 Msun. For GW200115, the two masses are estimated to be 5.7 Msun and 1.5 Msun. The masses of the heavier objects, though not as heavy as what LVC has detected so far, are well within the range of masses of black holes that have been observed indirectly by conventional telescopes, as seen in Fig. 3. Moreover, the masses of the lighter companions are well within the theoretical and electromagnetically observed mass range of NSs, roughly 1-3 Msun. The masses of the black holes are consistent with predictions from models of star formation and evolution but could, in principle, also be consistent with a more exotic origin such as primordial black holes, which are hypothesised to have formed very early in the universe.

What new Science did we learn?

These observations help us understand the formation and relative abundance of such binaries. Neutron stars are the densest objects in the Universe, so these findings can also help us understand the behaviour of matter at extreme densities. Neutron stars are also the most precise “clocks” in the Universe, if they emit extremely periodic pulses. The discovery of pulsars going around Black Holes could help scientists probe effects under extreme gravity. We could also use NSBH binaries to learn about the acceleration of our universe - particularly in cases where an EM counterpart is also observed.

Estimating how often mergers of NS and BH occur within a surveyed volume of space (often referred to as the “merger rate”) gives scientists clues to the origin and formation of these systems. The two detected events give us bounds on the NSBH merger rate; such events are estimated to occur anywhere between 2 to 250 times per year, within a volume of space centered at the Earth, and spanning 1 giga-parsec-cubed (one giga-parsec is about 3 billion light years).

Indian researchers from the LIGO-India Scientific Collaboration (LISC) contributed to this major discovery. In particular, Dr. Shasvath Kapadia from the International Centre for Theoretical Sciences (ICTS) in Bengaluru helped with the estimation of the NS-BH merger rate, using a method he co-developed.